In case you haven’t read my recent blog post (& why exactly haven’t you?!?), lately I’ve been enjoying a new take on an old classic-Unclaimed: The Memoirs of Jane E, Friendless Orphan.

Today, you get a peek behind the curtain and into the mind behind the story-author Erin McCole Cupp.  She’s beautiful, smart, funny, and she’s a great writer.  If I didn’t like her so much…well, let’s not go there. 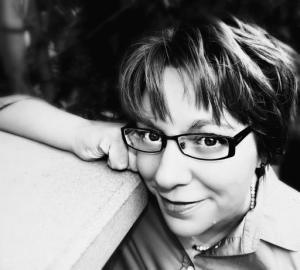 Q: So what made you think you could get away with rewriting Jane Eyre?

EMC: I never expected to get away with it! I think of it as more of a translation than a rewrite, anyway, and when you’re reading a translation, you must always keep in mind that it is but a pale image of the original.  At any rate, way back in Y2K, I had spent the first part of the year reading a steady diet of William Gibson, Neal Stephenson and Bruce Sterling–the revered trifecta of the cyberpunk subgenre of science fiction.  When our summer vacation came around, I decided I’d take a vacation from reading for professional development as an aspiring SF writer and bought a bunch of books from the literary classics bargain bin at a boardwalk bookshop.  A few chapters into Jane Eyre, my mind kept throwing up these weird parallels between the character of Helen Burns as Jane’s spirit guide and the character of Molly as Case’s spirit guide in Gibson’s Neuromancer. I remember thinking, “Wow, Jane Eyre would’ve made great cyberpunk.” [beat] “Oh, crap, now I have to write it!”

Q:  That was sixteen years ago, and the first edition of Jane_E dropped a decade ago. What made you decide to revisit your first novel and rerelease it electronically?

EMC: I just think (“hope” might be a better word) that the audience might be ready for it a bit more now compared to ten years ago.  I’d already been thinking of re-releasing it as a single book and getting a fresh cover, having it available in hard copy as well as electronic format.  However… it’s a long book when taken all in one slice! Jane’s story (mine as well as the Bronte version) also divides itself naturally into three parts: her early years, her developing relationship with her employer, and then everything that happens after that relationship catches fire, for lack of a better term (and those of you who’ve read Jane Eyre know of which I speak).  I figured that by breaking it down into smaller portions, a reader could take a chance on Book 1 (Unclaimed) without the commitment to some giant tome.  Of course if you want the giant tome, that’s still available.

Q: So when do the next two books come out?

EMC:  I’m looking at October 7 for Nameless (Book 2)  and December 6 for Runaway.

EMC: Because I’m mean.  Ha!  Actually, there’s the cover art to take care of, thanks to Fiona Jayde Media.  I also wanted to give the text a little extra polish that may have gotten lost in the initial editing, which was done when I had infant twins.  I’m working with Rebecca Willen over at Our Hearts are Restless, and she’s great–reasonable, thorough, no-nonsense–but I’m also letting those aforementioned twins (now 12 and homeschooled) provide an additional level of copyediting.

Q: What’s that like, letting your children correct your work?

EMC:  You mean, besides the weird factor of letting them read something on the edgy side that came out of my brain before they were even born?  Actually, it’s a lot less stressful than I thought it would be.  It’s a good way to model humility, really.  I mean, I’m the one always correcting their work, and now I’m letting them turn the tables.  I think it’s good for all three of us.

Q: Any other projects in the works?

EMC:  Always!  Besides the Jane E series, I’m a contributor to The Catholic Mom Prayer Companion, which is available on pre-order for an August 29th release.  I’m also working with Ellen Gable of Full Quiver Publishing on an anthology of Theology of the Body fiction and poetry tentatively titled Image and Likeness.  That’s exciting, working with so many talented authors, and that’s scheduled for a October 22 release.  Finally, I’m still pecking away at the first draft of the sequel to my murder mystery Don’t You Forget About Me.

SO, if you haven’t already purchased Unclaimed, what are waiting for?  Get on the Fan Wagon people.  This is good stuff. Seriously.

May Your Journey Be Blessed!

Laura B Nelson--a.k.a. "The Suburban Saint"

Fun, unusual and forgotten designations on our calendar.

Creating an Anxiety Free World, One Blog Post At a Time

keepin' it real in a broken + beautiful world